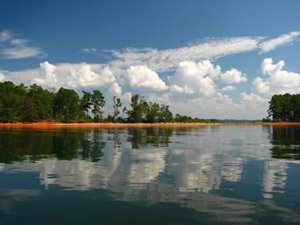 The Lake Murray area is home to one of Columbia's finest recreational assets. The lake covers an area of 78 square miles or about 50,000 acres of land. It is 41 miles long and 14 miles at its widest point. There are 520 miles of shoreline, which is more shoreline than the entire Atlantic coastline in South Carolina! All this is just 15 miles northwest of Columbia. 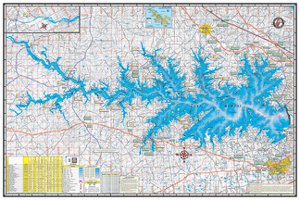 FOR MORE MAPS AND INFORMATION GO TO

Lake Murray is named after William Murray, the engineer who, with his partner T. C. Williams, conceived and persevered until "the world's largest earthen dam" at that time was finished. Their vision of harnessing hydroelectric power here and at the Santee Cooper project brought abundant electricity to the middle part of South Carolina. Work on the dam across the Saluda River was started on September 21, 1927 and was finished on June 30, 1930.

The river begins near the North Carolina border. As it runs to the sea, it fills Greenville Water reservoir, Greenwood Lake, and then Lake Murray. Past the dam, the Saluda joins the Congaree and Wateree rivers to flow to the Atlantic Ocean.

The dam itself was built over 200 feet tall. It runs a distance of a mile and a half across. The ground level of the dam is over a quarter of a mile thick. The lake that it forms is forty-one miles long and, in places, over fourteen miles wide. State Highway 6 runs along the top of the dam, giving a panoramic view of the water on one side and the layout of the SCE&G Power Plant below.